One of the best things about the recent Historical Novel Society Conference was the Bookstall and the opportunity to buy a book and get it signed by the author.

I bought a few books, not too many – at least I could still lift my suitcase when I departed. Since the conference coincided with the 350th Anniversary of the Great Fire of London, I bought two books on that theme. I might buy a third; the reading by C. C. Humphreys at the Gala Dinner whetted my appetite.

I will write reviews of them all, but I start with Death’s Bright Angel by J. D. Davies. I didn’t actually buy this at the Conference. I had ordered it and intended to meet the author to get it signed. The book was released on 30th August but it didn’t arrive until after I had left home – thank you Amazon! I understand that copies arrived at the conference bookstall eventually. 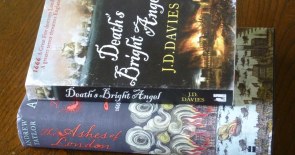 Part of my haul from HNSOxford16

Death’s Bright Angel is the sixth in the Quinton Journals series by J D Davies and Matthew Quinton has learned a few things. In the first of this series this Gentleman Captain knew nothing about sailing a ship – now he does. The book opens with a battle, a duel rather, between two ships. England is at war with both Holland and France and Matthew is searching the North Sea for their fleets. The ship he finds is French and they fight it out, cannons blazing and blood staining the decks, until one surrenders. Matthew wins, but his ship is damaged.

This theme continues. Success, but at a cost. He enthusiastically helps to burn the Dutch merchant fleet, an action to hit the economy of Holland and perhaps provoke rebellion. The destruction of a nearby, innocent village causes him to think again.

He is summoned back to England by the King and tasked with investigating a possible Dutch plot against the country. His pregnant wife is angry. She is Dutch and Matthew has bankrupted her father – his ships were among those burned. She has more to worry about when she discovers that her husband is working with the beautiful and enticing Aphra Behn, writer and secret agent. As the heat rises in early September 1666, Matthew Quinton, racked with guilt, must find the conspirators. What do they plan?

A fire starts in London, the East wind blows, the fire spreads. Should Matthew help to fight the fire or save his wife? Did the Dutch start the fire, or do they plan something worse?

This book is a thrilling race against time, combining action with a vast knowledge about the period. Historical characters make their appearances, King Charles II and his brother James, Samuel Pepys buries his cheese. The reader is there, in London during the Great Fire, walking, or rather running, through the streets, dodging the flames, pulling down houses and rescuing innocent people from xenophobic mobs.

There is more to this book, though, than a good read. Instead of the usual historical notes at the end, there is an essay, raising new theories about the causes of the Great Fire of London. The author is an expert on the period and has looked into original documents. When you consider that the burning of the Dutch ships occurred only two weeks before London’s fire, it would be difficult to conclude that there was no connection. Or perhaps it was just an out of control baker’s fire.

Two books for the price of one – what more could you want?