Christmas is approaching rapidly, but I am unprepared. I am writing and find it difficult to stop.

But it is not going smoothly; those word updates do not measure an even progress from start to finish. I am darting about from place to place, never knowing where I am.

I never thought it would be easy. The approach of Book One to publication day. The pause with Book Two, awaiting feedback and more editing. The start of Book Three.

It is Book Three that is causing problems, perhaps because I started planning. Not major planning, just dividing the book into chunks – I have six, or maybe seven. See, I can’t do planning properly! A few weeks ago I wrote here about having found an antagonist. I wanted to give him a trial, so I wrote a scene, then another. This section of the book, for various reasons, I planned to write in the present tense. It would be interspersed with other POVs. So that I didn’t become confused, I decided to write the whole of this section, before moving back to past tense. It must have worked, because I then had difficulties shaking off the present tense. I had 9,000 words.

I knew what came next, I continued, another 9,000 words. The ideas were coming thick and fast, I wanted to carry on. Nothing wrong with this, you might say, in fact it’s great.

Except – I’ve got to stop. This section is towards the end of the book. I think I know where the end comes, but more and more words come spilling out and the end gets further away. What about what comes before? The main part of the book. Not only is it not yet written, I’m not even sure where it starts! With regret, I have forced myself to stop.

I have returned to the start. I have rewritten an abandoned ending to book two as the start of book three. I have written more, I think it is going OK.

But – As I write, the abandoned characters at the end keep calling to me, “Come back, we want to carry on.” While the same characters, at an earlier point in the story shout, “No, us first. We might change everything and you will never exist.” It is difficult enough, but the book covers a year in time, from winter to winter, Christmas to Christmas. Today, I had to stop and think – would he be wearing those clothes, or did he acquire them later. One Christmas is happy, the other not. There is snow one year and not the other.

And then there is real life, Christmas is coming. Will my mother end up with a sword. Will Byrhtnoth find a box set of Vikings DVDs under his tree?

Should I give up and spend the next month in bed?

No, because the voices are calling and I cannot silence them. 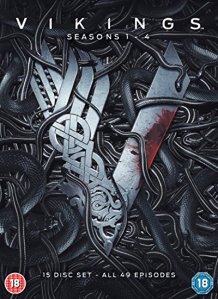