With apologies to the Rugby Cafe Writers group, whose subject this was at their latest meeting, where do I get my ideas?

Writing historical fiction, I am constrained by what was actually happening in the period the book is set. The advantage of writing about the tenth century means that there is not a lot of known facts to contend with. In fact the plot outline is provided by the Anglo-Saxon Chronicles. Book three is set in the year A.D.948 and according to this source, these are the events: 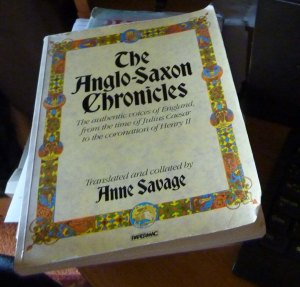 Research – £2.99 from Oxfam according to the label.

A. D. 948. King Eadred ravaged all Northumbria, because they had taken Eric for their king.
In that ravaging the minster at Ripon was burnt down, that St. Wilferth had built.
When the king was going homewards, the force in York overcame the king’s troops left behind in Castleford, and there was much slaughter.
Then the king was so enraged that he wanted to turn back and destroy that land, and everything in it.
The Northumbrians perceived this and gave up Eric; they made amends for that deed with king Eadred.

This is quite a lot to work with. Apparently two years later, in A.D. 950 absolutely nothing happened!

How was Byrhtnoth involved in these events? Apart from (probably) being alive at the time, nothing is known. So in the tradition of most historical novelists, Bernard Cornwall and Uhtred, etc, I must put him in the heart of the action. For some reason, that I don’t remember, I started writing the second part of the book first, then went back to the start. I am nearing the end (or what will be the middle). This week Byrhtnoth arrived in Ripon.

I have never been to Ripon, so I consulted my other sources (Wikipedia and Google Maps). One important fact I discovered was the Minster, which was burnt down, was in fact built of stone – one of the first Anglo-Saxon buildings built of that material. How do you burn down a stone building? I had a lot of thinking to do: What did it look like? How was it furnished? How would I burn it – if I wanted to do such a thing. I think I came up with a reasonable solution. You will have to wait until the book is published, to find out how.

All I have to do now is describe how Byrhtnoth survives Eric Bloodaxe and the great slaughter of Castleford and the first draft will be finished.