Today is the one thousand and twenty ninth anniversary of the Battle of Maldon – or was it yesterday? Or two years later, or three years earlier; the sources differ. One thing is certain, we know where it took place. Or do we?

Everyone knows that the Vikings landed at Northey Island, not far from the town of Maldon, and the Battle was fought at the landward end of the causeway, when Ealdorman Byrhtnoth foolishly allowed the enemy to cross and was killed in the ensuing battle.

I wrote about the battle a month ago as part of the Historical Writers Forum Summer Blog Hop and it was as a result of that post that I received an enigmatic tweet that led me to a completely different theory.

Surely it is obvious, the Northey Island location fits the facts – if the Battle of Maldon poem can be called fact. But does it? I was shocked to learn that it was only in 1925 that this site was decided upon. Is it coincidence that the site identified was open, visible and easy to view. The National Trust put up a sign and the site was protected. It even appears on maps.

What is the evidence? Archaeological field walks have taken place on and around Northey Island. Roman, Medieval and Post-Medieval material has been found but nothing Saxon, and definitely no signs of Vikings. Did ninety three Viking ships arrive, full of warriors, hang around for a few days then fight a major battle – all without leaving a single coin or belt end, or trace of a hearth?

Also, when you think about it, the site doesn’t make sense. Vikings are known for sailing up rivers, as close to their destination, then hitting hard and fast before leaving. Why hang around in the middle of the river, giving time for defenders to arrive, then fighting their way ashore, still some distance from their objective; the mint located in the Burh at Maldon, built by King Edward the Elder in 912?

Even before the 1925 decision, historians had offered different locations, why were they never considered? In this situation local knowledge is helpful and knowledge that included research into the topography of the area at the time of the battle is vital.

The river has changed a lot over time, sea levels were lower and at one time the River Blackwater was navigable as far as Heybridge, where an old church, probably Saxon in origin overlooked a marsh. The road that runs from Heybridge to Maldon through this marsh has long been known as “The Causeway” and regularly flooded. There is also a bridge, which is mentioned in the poem. Wouldn’t this have been the logical place for the Viking to land? It fits the details given in the poem better than Northey

The clinching point for me is the archaeological evidence, sadly lacking at Northey. In the 1960s, work in the vicinity of The Causeway brought to light a collection of swords and what might have been shield bosses. Unwilling to experience delays, the objects were reburied, except for one sword.

This later found its way into the collection of the Combined Military Services Museum in Maldon and has been identified as Viking and dating to the late tenth century.

As far as I’m concerned, the presence of a viking sword of the correct era is surely a clue that something happened in this area at the time, and that event must have been the Battle of Maldon.

Why are the National Trust and English Heritage so unwilling to investigate this alternate theory? Is it because it is easier to put up a sign and say “Job Done”?

All I can say is  the next time that I visit the statue of Byrhtnoth in Maldon, I will look up at him, gazing resolutely downriver towards Northey Island and whisper “They’re behind you!” 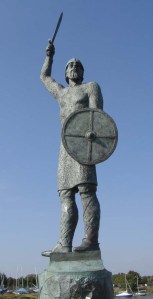 Thanks to Stephen P Nunn  expert on all things Maldonian for the info included in this post and permission to use of the picture of the sword.

For more information about this theory see this difficult to find page of the official Battle of Maldon website.
And for pictures and maps see this pdf from the Battlefields Trust.

2 thoughts on “The Battle of Maldon – where was it?”