Most people have a a favourite month. I quite like May with it’s promise of summer, and October; a month of autumn colour and fruits, December brings Christmas, then there is the relief of January and new year. Other months I tolerate, except they pass too quickly nowadays. But I don’t like August. I should – after all, it is the time of heat, holidays and nothing much to do. I’m sure I must have enjoyed it when I was young, that long school holiday, all that time to read!

Somehow I have come to dislike it. People die (see last two posts – sorry about those!) then a few days ago I was reminded, by the excellent Captain Thomas Bowrey blog that it was on the 12th of August, in 1704, that the ship Worcester was seized in Scotland. I have an interest in John Madder, although he died in April, but this was the event that led to it. Come to think of it – I’m not too keen on April.

We don’t often take holidays in August – too expensive, too crowded and we have found, too wet. Every time we have tried to go away in that month, it has rained.

But this year I am enjoying August. If it rains, I am glad. I shut myself away and edit. Enjoy editing? I can hear the shocked gasps! Perhaps I should say that I enjoy this stage of editing. I have written my first draft and I know my writing is bad (Please don’t shout in agreement!). When the words flow, I am not concentrating on perfect prose, I just need to get it down. That is why I enjoy the editing. I now know what is wrong, and I can put it right.

I know my spelling is erratic. I know I have a tendency to use the passive voice and my verbs are progressive rather than simple (see that “am not concentrating” above? – it should be “do not concentrate”). As for my punctuation, we will ignore that for now – as I usually do!

Just for fun, here is something, picked at random and how I dealt with it.

We raced along the hard sand, close to the waves. The wind had picked up and the waves were larger. We laughed as we tried to dodge their attack upon the shore. Then the torrent of rain hit us. The shape of Bebbenburgh disappeared. We slowed slightly; there was no point in breaking a horse’s leg, or our own necks on some hidden obstacle. (64 words)

The first thing is that Spellcheck didn’t like “Bebbenburgh”. I’m not sure about it myself! About half the book takes place at Bamburgh. I am still undecided on which version to use – the modern or contemporary to the story. The text is scattered with alternate versions. This is something I will sort out later – decide which to use, and the spelling, and do a mass correction.

The next thing – is this scene actually needed? Does it progress the plot, or can I delete it? It follows a rather static scene; a conversation where characters exchange pieces of back story. A bit too much telling instead of showing. There has to be some “telling”,  but with this scene I can “show” what the characters feel about it.

How this scene is edited depends on the situation. For example, if they were being chased by rampaging Vikings, I would choose short sentences, get rid of surplus detail. It might end up something like:
We raced along the beach, dodging spears. The rain hit. Vision narrowed. We rode faster.
Down from 64 words to 15 and much more exciting, you feel your heart beat faster in response.

But there are no Vikings, they are riding for pleasure, they have enjoyed their conversation. They are excited, not terrified. Are there any words we can get rid of?

In the first sentence, would “across” be better than “along”? More suggestive of speed?

I mention the waves twice. Everyone knows that the hard sand is close to the waves, we can delete that phrase.

I have previously mentioned the wind, so no problem with it picking up, but that “had” is clumsy and the linking “and”. Merge the two events into one.

The torrent of rain is OK, but is that “us” really needed? Why not an example of how heavy the rain is, how it affects them?

The shape of Bebbenburgh disappeared. They are riding along the beach towards it, of course they can see it to start with (and not just the shape of it!). The rain comes, so heavy that it disappears , but it isn’t the only thing that disappears, the beach, sea, sky also disappear.  Just say “Everything”? (I’m not sure about this, I must think of a different word.)

How do you slow “slightly”? Another word gone.

Then that final sentence: again two clumsy phrases connected in this case by “or”. Can I amalgamate them, anyway isn’t breaking your neck more important than the horse’s leg?

Finally, what about that hidden obstacle? If it wasn’t hidden they would see and avoid it. It isn’t needed.

We raced across the hard sand. Wind drove the waves higher and we laughed as we dodged their attack upon the shore. A torrent of rain hit, drenching us to the skin, and everything disappeared. We slowed, no point breaking our necks or a horse’s leg. (46 words)

I think it reads better, the action is sharper, the emotion clearer, and I have avoided the Bebbenburgh question.

This fragment has reduced from 64 to 46 words. Then it’s on to the next sentence – that’s editing for you.

And in case you wondered, “we” were not on the beach in August, it was the end of October! If you want to find out what they were doing there, and why they were laughing, I’ll be looking for Beta readers, as soon as I’ve finished this round of editing!! 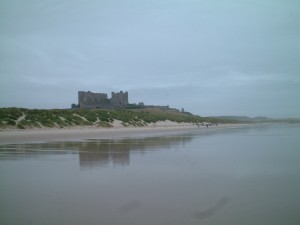 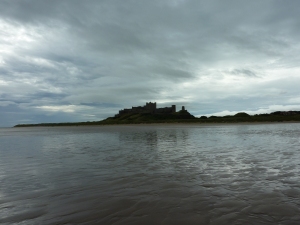 Today is a bank holiday (in some places) so I thought I would talk about a recent holiday, or research trip as writers call them.

When I first started writing I made up the places where events took place, I knew exactly what they looked like. Unfortunately I then tried to find the location “in real life”. It made for some interesting holidays and was surprisingly successful. However I am growing up and have started to become more organised. I am visiting before I write – but how useful is it?

I have set part of my second book in Northumberland, at Bebbenburh (Bamburgh). The first problem was that I wanted to visit in autumn, but my husband insisted we go in August. Actually August is autumn according to the Anglo-Saxon calendar, but I was thinking howling winds and lashing rain. Perhaps I would be lucky with the weather – I wasn’t. We had the most pleasant weather imaginable; warm and sunny.

We had booked four nights at the Blue Bell Hotel in Belford. It was very comfortable and the food was good. We didn’t even need a clock as the village church was next door and struck the hour, every hour, even though the night.

View from our room.

We had planned a walk for the next day, but it was a bit cloudy. Since the forecast was for sun later, we decided to postpone the walk and drove the few miles to Bamburgh. We parked in the (free) car park and walked up to the entrance. We had explored the castle some years ago, so we intended an external circuit, for me to soak up the atmosphere. We were early and I don’t think it had opened anyway. We peered through gates until we came to a dead-end. We found a path down to the beach and the tide was out. I had a nice paddle and took lots of photos of the castle silhouetted against the dramatic sky. I started planning a scene of my hero galloping along the wide sands, with his dog. First mistake – it seems that the wide sandy beach wasn’t there at the time – scratch that scene!

Bamburgh Castle from Beach plus dog 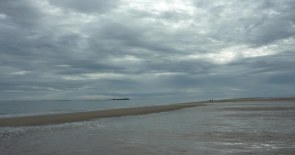 Of course I already knew that the castle would not have looked like it does now. It would have been smaller with a wooden Hall and other buildings surrounded by a wooden palisade. At least that is how it was originally built, but might the walls have been replaced by stone by Byrhtnoth’s time (the tenth century)? More research needed! I was sure where the entrance had been. Anyone who has read Matthew Harffy’s book The Serpent Sword (and if you haven’t, why not? Buy it here for only 99p) will remember the opening scene of Beobrand’s arrival by ship (somewhere near the bouncy castle) and entry up the narrow steps – in wind and rain, of course! Interestingly, when I re-read that piece, I noticed that neither the width of the beach nor the composition of the walls is mentioned. A good lesson. If you don’t know the answer, leave it to your readers to imagine it – if they get it wrong it is their fault, not yours! 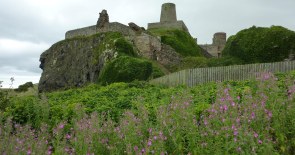 Steps to entrance of Bamburgh Castle

After a coffee and a toasted teacake at the Copper Kettle Tearoom in the village, we visited the local church, originally founded by St Aiden in 635, the first church to be built in Northumbria. The reredos, which dates from the end of the 19th century contains images of many Northumbrian saints. 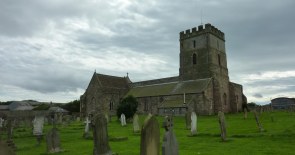 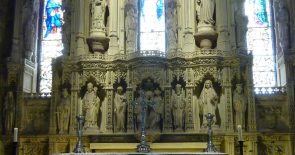 As we left Bamburgh the sun came out. We headed inland to start our planned walk. We had found a suitable walk online to St Cuthbert’s Cave and round the surrounding area. It included part of St Cuthbert’s Way, a long distance footpath from Melrose to Lindisfarne marking events in the life of St Cuthbert.

The cave is supposed to be the place where monks carrying the body of the saint rested on their journey from Lindisfarne Abbey after it was raided by Vikings in 875. The bones eventually arrived in Durham several years later.

Climbing the hill towards St Cuthbert’s Cave. Looking west towards the Cheviots (not the sheep!)

Owned by the National Trust – spot the error!

“Pass through this gate and then the gate on your left” Would you? We did – quickly.

The next field had cows and calves. We walked very slowly, under intense observation.

The views were worth it, though. Lindisfarne in the distance

After the walk, we returned to our hotel. It had been a long day and there would be another tomorrow.