Well, we’ve made it to Boxing Day; survived another Christmas. How was it for you?

As we settle down to read our books, play with our presents and think up ever more imaginative recipes for left overs, here are some thoughts about the real meaning of Christmas.

What comes into your mind when you imagine Christmas? Peace and Goodwill to all Mankind? Food and Drink? Family gathered round a roaring fire? Snow? 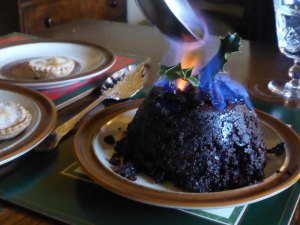 Lighting the Pudding – Symbol of Midwinter?

No, the real meaning of Christmas is Fear. Fear of the dark. Fear of starvation. Fear that this year the sun will not return and the world will end.

This is the reason that men hauled rocks half way across the country, to measure the midwinter sun at Stonehenge and passages in cold barrows were carefully aligned to mark the moment. Why calendars were developed, to calculate the day; the day when the sun turned and all mankind rejoiced that life would continue.

At a time when life depended on a good harvest and food was short in winter, it was a vital time; more so the further north you lived. Cold as well as the absence of light could be deadly, which is why most of the winter traditions originated there. Do people who live close to the equator and have no experience of short freezing days have any winter celebrations?

Winter comes and times are hard. Food must be hoarded, eked out to last the winter. Fuel collected to keep warm and the darkness at bay. How do you know when the worst is over? When the days lengthen again. What can you do to help it happen? Mankind has always invented rituals to control their lives; gods to pray to or bargain with; someone to thank when things go right – or make sacrifices to, when times are bad.

That is why we have Christmas and all the other winter festivals. I am not going into details. I’m sure most of us are sick of the discussions as to whether Christianity took over the Roman festival of Saturnalia or arguments about who invented Father Christmas or Santa Claus and whether his reindeer sleigh developed from Odin’s cart pulled by goats. Common to all of them is the moment when darkness was conquered and we could celebrate.

However, nowadays we seem to have lost the reason and celebration is everything. The early Christians turned necessity into religion, with Advent. A time of prayer and fasting, before the celebration of the Birth of Christ. The date was set as 25th December, disconnected from the actual shortest day and it lasted twelve days.

In the present era of plenty, people forgot the time of starvation and advent has become part of the preparation. Every year the period becomes longer, it now starts with Black Friday, in November and the shops start to fill with Christmas goods even earlier. Everyone complains it comes too early. There is the putting up of trees, sending of cards, the office parties and other premature celebrations. By the time Christmas Day arrives, everyone is sick of it, and so we sit here thinking “Was that it?” and start taking down the decorations.

Knowing there should be more, there is a final burst of fireworks and drinking. New Years Eve, when everything stops and we watch the clocks count down – to what? A moment accurately calculated by scientists to mark – an event nearly two weeks past.

This change is not recent. It happened long ago, when we lost our connection with the land, and time. Is it a coincidence that Charles Dickens wrote A Christmas Carol, and in the process “invented” the modern Christmas, at just the tipping point that more people lived in towns than in the country? When the agricultural cycle was forgotten by most. In cities, with industry and commerce, there was no winter starvation. If you were poor you could starve at any time of year, for everyone else food was plentiful all the time. But the mid-winter celebration was remembered.

Religion declined, and advent became a tinsel covered coat hanger on Blue Peter. People still go to midnight mass on Christmas Eve, not even knowing why.

And we are discontented with Christmas. We feel guilty because, deep in our ancient brain we know it is wrong. Wrong to celebrate when we have not performed the penance, placated the gods.

Is that why, when it is all over, when the New Year has been rung in, then we make our promises? To give up alcohol, to get fit, to become a better person, to finish writing that book.

Wouldn’t we enjoy Christmas more, if we had done that first?

Is that why I read, and write, historical fiction? Because they knew how to do it right?

Yes, I know it’s already halfway through January, but I like to give these things plenty of thought. Since

my resolutions usually don’t make it to the end of the month, I need to make sure that I can actually achieve what I promise. Especially if I am posting them here for all the world to read.

Here goes. I will try to write everyday. Of course this is meaningless unless I set a target of how many words and what those words must be. Should this blog post count? What about a shopping list? Or Twitter? The latter probably not, but since another resolution is to blog more regularly, perhaps I should include posts. In theory it should be creative writing – or as creative as my writing gets.

Now to set a target. Reading about famous authors and other distracting rubbish about “How to Write” the general consensus seems to be around 1000 words. It sounds reasonable. A thousand sounds like a big number but it’s not that difficult – about four pages, double spaced. I will try to write (at least) a thousand words a day.

Ah, but what happens if I can’t write that day. For example, today. I spent all morning scanning in old postcards for a local history group. The group meets every Tuesday evening, so that’s this evening taken care of. I have just returned from giving blood. (My 80th donation, as it happens. They gave me a cup of coffee and a pack of biscuits!) So I am now reclining on a sofa with a large glass of water (no alcohol allowed.) tapping this out slowly with one bloodless finger. See what I mean about creative writing!

I decided I would calculate my daily target over a week – that’s seven days at 1000 words a day which comes to (scratches head, counts fingers) seven thousand words – scary! How much that adds up to over a year, I’ll leave to you. Actually that’s not scary, it’s absolutely terrifying! Perhaps I’ll include the tweets.

I few more details, when does the week start? New Years day was Sunday, so the end of the week is Saturday.

I am already into week three – how am I doing?

On January 2nd word count of my WIP (working title Byrhtnoth II) was 4,311,

Those editing fiends out there might have noticed one small weasel word “try”.

My resolution is to try my best – in the end that’s all you can do.

I will report my weekly totals, so you can check how I’m getting on. If I fail, I will tell you why – That should help with the creative writing!

(This post is 474 words, nearly halfway there for today.)

It’s New Years Eve and everyone is writing/blogging/tweeting their view of the past year. I thought I’d join in the fun.

So, 2016 – worse year ever?
Yes, some famous people died, but that happens every year and once it had been decided that this year is the worst, every new announcement just adds to it.
Yes, there were a few political decisions made, that the losers thought were wrong. We live in a democracy – it happens, get over it.
Yes, everyone worries what 2017 will bring – it hasn’t happened yet, enjoy today.

As you might have guessed, I am a glass half full type of person. How has 2016 been for me?

Not bad. I’ve kept healthy, bar the occasional sniffle. So has the family, apart from the removal of an appendix and a gradual loss of memory (not in the same person).

I have gained a grandchild. Molly was born at the end of January and she is the most beautiful, talented child ever born. All grandparents say that, but in this case it’s true! 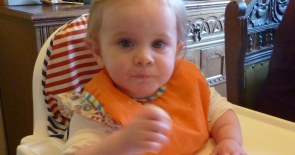 During the early part of the year I severed all links with my childhood home. We had moved my mother to a care home near us and her house was sold. We had moved into it 50 years ago, so there was a lot of sorting out to do and memories to relive. I hope the new owners will be as happy as we were. 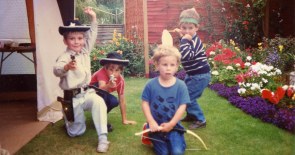 The Indian at the front is now Molly’s dad!

We have had several breaks away this year. A visit to Dorset, which included the Chalke Valley History Festival, see here and here for a report about the fun we had in the mud there. Later we went to Northumberland – read about that here and here.

Holidays now seem to be chosen with Anglo-Saxons and writing in mind, which brings me to the main point of this post.

This is the year writing took over my life.

With a trip to the Self-Publishing Conference in May and the HNA Conference in Oxford in September, I have been meeting other authors and learning about this business. I still attend the class I first signed up for in January 2013 and recently joined a Cafe Writers Group.

Most of all I have been writing. Or Editing. Or thinking about Writing. Sometimes reading. Everything else has been pushed to one side – I spend a lot of time in the 10th Century!

People say that if you write, you are a writer. I’m not sure. You are only a writer if other people agree with that opinion. Last night I got an e-mail from one of my beta readers. My first feedback. There were interesting suggestions and reports of spelling errors (that’s why I need an editor) but he said it was “a great read”. What a wonderful end to the year!

To be published – even if I have to do it myself.

Only then can I call myself “A Writer”