Apologies for the delay in this week’s post, but I had to go to a funeral.

At least it gave me a subject to write about, not about the funeral as such, but some insights into families.

I also had plenty of time to think. It was a long journey, about 180 miles each way, including part of the M25. It took over four hours and we were one minute late, creeping in during the first verse of “All Things Bright and Beautiful”. Others were later! Then it was back to the house to chat with relatives who we only manage to meet up with at funerals (and weddings – except no-one seems to bother getting married these days!)

My father was one of a family of five, three boys and two girls. Only one is still with us; the funeral was for another. It is now up to the next generation, the cousins, to keep the different branches of the family in touch, we send Christmas cards, and Facebook is bringing us closer.

This is a photograph, taken yesterday. 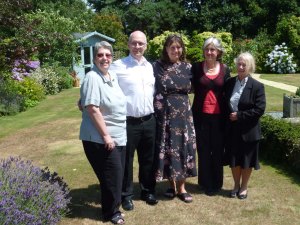 Ignoring the man, here are four women. Each is a daughter of one of those five brothers and sisters; the fifth sibling produced only boys – none was there for the funeral, probably coincidence, or do the women in a family make more of an effort?

We are a variety of sizes and shapes. Is there any resemblance between us? Possibly, but we each had another parent to dilute the family genes. We all married (some more than once), we all have children and some have grandchildren. We all get on, despite not meeting very often, or perhaps because of that. Are we any different from a random group of friends, or total strangers?

Someone (Harper Lee, I think) said “You can choose your friends but you can’t choose your family,” Bearing in mind the distance between us – we all live in the southern part of England, but as I found yesterday, too distant to pop in for a cup of tea – if we were friends we would have to make an effort to meet up. As it is we have to rely on the odd funeral to get together.

But they are still there, somewhere in the background, our family.

What is this to do with writing? A little while ago I wrote about mothers, how all characters must have had a mother. She must have had some influence, good or bad, that made them who they were. Cousins are different. They probably don’t have influence on you, but they are there, lurking in the background.

Several of my characters are orphans. My protagonist has no family; the book, the whole series, is about his feeling of loss, about his search for a family. Will he find them or will his friends become his family? Does he have cousins? It is something I will have to think about.

Cousins in novels are usually a device; the cousin in Australia who leaves a character a fortune that changes his life, the mysterious cousin murdering relatives because of some ancient feud.

In history, especially in a ruling family, cousins can be a problem (The Wars of the Roses has become known as “The Cousin’s War”.) or the means of continuing the dynasty, hopefully without bloodshed (James I after Elizabeth, those Germans after the Stuarts). In the Anglo-Saxon period, there was no rule that son followed father to the throne, the best person could be chosen from the “royal” family, barring Viking invasions. Did it cause problems between cousins?

But history is usually about male cousins. What about the women? They would be married off, sent to form a link with another country. Often we don’t even know her name. In more ordinary families, they would disappear, appear only as “wife of”. They would have children, boys would recognise their male cousins – they shared a name after all – but what about the girls? Did they become submerged in their “new” family or did they keep in touch? Did they meet at funerals, or communicate via whatever was the historical equivalent of the annual Christmas Card?

They are the invisible glue that keep families together.

And I did manage some editing last week, despite funerals, and Wimbledon. 11,884 edited, 890 lost. Think that is an improvement!