Still no writing – not book writing anyway. It has been a confused week of editing and cover design for the Local History publication, demonstrating Family History websites in the library, interspersed with a guest post on the Discovering Diamonds Blog about the excitement of receiving copies of my book. Thank you Helen Hollick for accepting it. 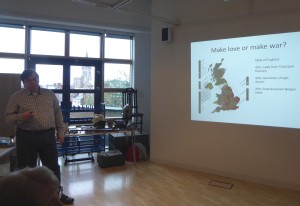 Saturday was the second of my promotion events. I had hijacked the monthly meeting of the Rugby Archaeology Society, by suggesting a talk about Anglo-Saxons. Fellow author Richard Denning came to tell us about “Life in Anglo-Saxon England”. It was an entertaining talk including history, food, religion – everything Anglo-Saxon – even genetics. He brought a large collection of objects, which were handed round or inspected afterwards. He brought some of his books for sale, including several for children.

I had my books there, of course, and there was another chance to taste my mead. I got several favourable comments – perhaps I should give up writing and go into mead production!

Now I have a cold. I don’t think it’s anything serious, but I don’t feel like doing anything. I have forced myself to the computer to write this (it probably shows!)

Although not writing, I have been doing a lot of thinking, helped by last week’s class. It was about plotting – regular readers of this blog will know my opinions on that. This was about applying different methods to your writing: “The Three-Act Structure” and “The Hero’s Journey”. Book Three looks good – words like Birth and Death, Shipwreck, Battle and Rescue scatter the chart. The problems come with Beginning and End.

I thought Book Two, although needing more editing, was in its final shape. Was the ending too final? OK for a single book, but for a series? I was finding it difficult to decide where to start Book Three – I’ve written a lot, but the vital beginning is unclear. I had a thought – what if I cut the ending of Book Two and use that for the start of Book Three? It might work, although it might leave Book Two a bit short – more detail earlier on? It would also make Book Three even longer.

But. Could I cut the end of Book Three? There’s that convenient point when… Is that the start of Book Four? I haven’t thought much about that yet. It might work. Do I have an over arching structure for the series? I don’t even know if Book Four is the end, or not.

I think I will be spending some time in planning – comparing what I have against the various structures. I think some synopses will help – I tried to write one for Book Two. When I found it difficult I should have known something was wrong.

Perhaps I’m over-thinking. I should just get on and write. I’ve had an idea for a short story. Do I have time for that?